A Random, and COMPLETELY TRUE! History of the World (with funny pictures)

Sometime around 1362, A group of sixteen Scotsmen picked up sticks, and began hitting each other. There was nothing new about the hitting, but this time it was slightly different. There were rules.

This sport, or Whockey, is a perfect example of the Scotsman’s fondness for hitting his compatriots with sticks, rocks, and the occasional sheep.

In 1997, a local farmer was tilling his fields, when he hit a rock. This rock was the first Whockey rulebook. When the news reached England, it proved what the British had always thought: that the Scottish were just Vikings with kilts.

Scientists discovered that over the course of time, Whockey has sort of evolved.

In 1389, the Whockey Sticks were given a regulation size.

In 1395, a rock was introduced to the sport, as a long ranged method of scoring.

In 1492, Columbus discovered America. This may not seem pertinent to the story, but Columbus was an avid Whockey player, and had several titles to the sport. 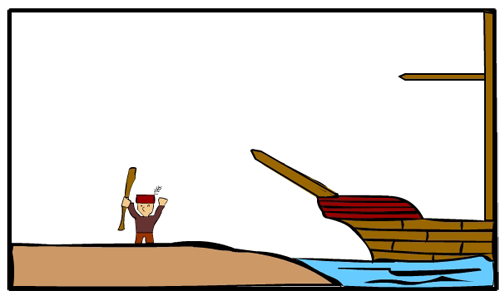 Eventually, Whockey evolved into two seperate sports. The gentlemanly sport of golf was one. The other, invented by the bloodthirsty Canadians, was Hockey: the most violent sport in the world.

One Response to “A Random, and COMPLETELY TRUE! History of the World (with funny pictures)”